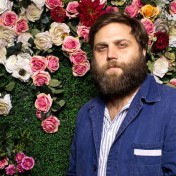 As Tracy Morgan would say Micah Perta is a genius mot*#@^*#+^! He would also probably let you know that Micah cut his teeth writing and directing for the infamous MTV promos department and had the pleasure of directing everyone from Martha to Snoop, Kanye to Conan, Ellen Page to Mark Wahlberg, just to name a few. NBD.

Through his unique storytelling style and comedic POV, Micah has directed award-winning work for world-renowned brands. In addition to MTV, he’s worked with Verizon, Pepsi, Toyota, Glanbia, Hershey’s, Wendy’s and Stride Gum, among others. His side projects have been praised by the New York Times and have garnered millions of hits on YouTube. Along the way he has collected plenty of metal from The One Show, The Clio’s and The Promax Awards.

Whatever the project, brand or medium, Micah brings creativity and a thoughtful alchemy to his work – hopefully making you laugh, or at the very least say WTF.